Not able to decide between WP Rocket Vs Swift Performance? Then I will help you to pick the right cache plugin for your WordPress blog.

Generally, there are various WordPress Cache plugins present in the market, but the majority of the users prefer to use WP Rocket and Swift Performance mainly because of their fantastic feature.

This article will be essential for those readers who want to know which one is a better WordPress Cache Plug-in among WP Rocket and Swift Performance. Therefore, all the interested readers must go through this article thoroughly.

What is WP Rocket?

WP Rocket is a WordPress caching plug-in, which is mainly created to speed up WordPress websites with minimal effort. It is found that WP Rocket is currently used on nearly 500k websites and is very popular, although it was introduced five years back.

What Is Swift Performance?

Swift Performance offers an intelligent caching system through which it allows users to cache AJAX requests and dynamic pages. Moreover, this plug-in also lets users to set rules if they don’t want some files to be cached.

A Quick Comparison Between WP Rocket And SWIFT Performance

Which Is Best Among WP Rocket VS Swift Performance?

One of the main factors that come to a users mind while using a WordPress Cache plug-in is how effortless it is to use a particular plug-in because it is tough to manage a complex WordPress Cache Plug-in.

For example, older cache plug-ins like W3 Total Cache (W3TC) was a pain to set up and seemed to require a secret configuration for every server/site.

But luckily WP Rocket has a straightforward interface and hence it really very easy to manage WP Rocket even if a user is using it for the first time. Users can instantly start working with this plug-in instead of wasting time on figuring out the right settings.

On the other hand, Swift Performance has a slightly complicated interface, and hence, users need to configure different things before starting the actual work. This WordPress plug-in is appropriate for tech-savvy and experienced users but not ideal for beginners.

Winner: Therefore in this category, WP Rocket is the out and out winner as both beginners, and experienced users can use it because of its easy to use interface while on the other hand, Swift Performance can be effortlessly used only by experienced users.

Conflict Resolution is a significant area of concern, especially when comparing full-featured plug-ins. WordPress Cache Plug-in is often so aggressive with website optimization that they end up breaking any site or causing FOUC/FOUT issues.

Some plug-ins even compel users to delete the cache and restore their access files, maybe also re-install the plug-in manually through FTP while the best plug-ins allow users to still get into the admin dashboard area and make changes.

In this regard, WP Rocket is definitely easier to manage as it offers an easy way to dial back certain settings to resolve CSS/JS conflicts. Moreover, users will find that in WP Engine, it is more natural to uncheck things and retry the front end again.

Swift Performance, on the other hand, does not offer any proper settings and hence often users keep wandering around thinking which things to uncheck.

Winner: Therefore, in this category, WP Rocket is the distinct winner as it offers various settings which often help users to uncheck things and retry the front end again.

This is also an essential factor to determine the effectiveness of any WordPress cache plug-ins. Hence before using any plug-ins, users must apply them on the three most essential servers, which are Apache, LiteSpeed, and NGINX servers.

On the other hand, Swift Performance almost performs equally well on all the above-mentioned servers.

Winner: In terms of Server compatibility, Swift Performance is much better than WP Rocket mainly because of its steady performance on all the servers mentioned above.

Customer support is always a determining factor between good and best plug-ins. Best Plug-ins have top-notch Customer Support facility with agents work round the clock to help their customers.

As mentioned earlier, WP Rocket is perfectly suitable for the amateur user, which is true because it has a reliable support facility. WP Engine is such a plug-in company that has someone more readily available to diagnose issues and recommend settings for any site.

Swift Performance, on the other hand, has incredible support and despite the rapid growth in the recent months, they have done well to answer support tickets, reply to forums, and reply to their Facebook group, but it is not as effective as the support facility of WP Rocket.

Honestly speaking cost shouldn’t be an issue for serious website owners who are already monetizing with their sites, but it certainly is the case for people looking for free options for their personal sites or those who manage the client sites.

WP Rocket only offers premium plans, so users need to invest a fair amount of money in order to utilize even the basic features of WP Rocket. On top of that, the basic price of WP Rocket is $49/year, which is definitely much higher than most of the other WordPress Cache Plug-ins.

On the other hand, unlike WP Rocket, Swift Performance offers both free and paid plans, and hence, users can easily enjoy the basic features without investing a single penny. Moreover, the basic premium plan of Swift Performance cost $39.99/year, which is also a lot cheaper than WP Rocket.

Conclusion: Which is the Best Cache Plugin For WordPress?

As promised at the beginning of this article, we have given an in-depth comparison of WP Rocket and Swift Performance on the basis of a few standard features.

So, at the end of this article, we can finally declare WP Rocket as the overall winner because out of the five standard features mentioned above WP Rocket is the clear winner in three of the features.

However, Swift Performance is equally effective, and in the future, with slight improvements, it can definitely become much better than WP Rocket. 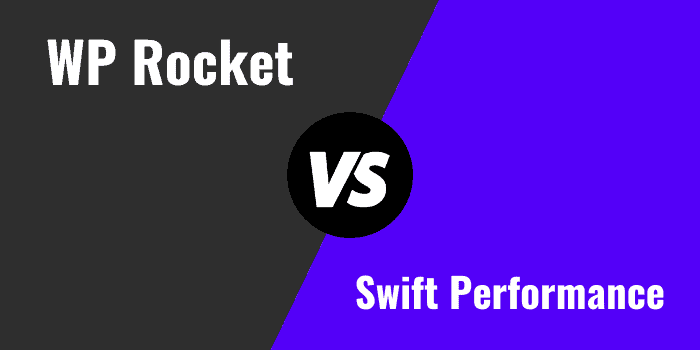 This post contains affiliate links, which means that if you click on one of the product links and then purchase the product, we’ll receive a small fee. No worries though, you’ll still pay the standard amount so there’s no cost on your part.